Gyeongbokgung Palace is one of the oldest of the five places in Seoul. It is such a great and magnificent building as a representative of Joseon Dynasty. It shows off the beauty of its construction. Through this, it can be a representative tourism spot for foreigners to understand the tradition and history of Korea.

Samcheong-dong is the neighborhood located northeast of Gyeongbokgung Palace, and its main road has become a representative cultural street of Seoul due to the many cafés, galleries, and unique restaurants. The area is enjoyable regardless of age or gender, with special attractions like the World Jewelry Museum and more.

Insa-dong is a very well-known place where old but precious traditional objects are exchanged. With its uniquely crossed main streets and alleys are intertwined, Insa-dong is also famous location for art galleries, antiques, artistic crafts, and traditional cuisine & beverages.

The National Museum of Korea is the museum of Korean history and art in South Korea, also is the cultural organization that represents Korea. Since its establishment in 1945, the museum has been committed to various studies and research activities in the fields of archaeology, history, and art, continuously developing a variety of exhibitions and education programs. Since its relocation to Yongsan District in 2005, the museum had attracted an attendance of 20 million visitors, or over 3 million annually which makes it one of the most visited museums in the world. Thousands of foreigners have visited this museum and selected as their “worth visiting place in Seoul.” 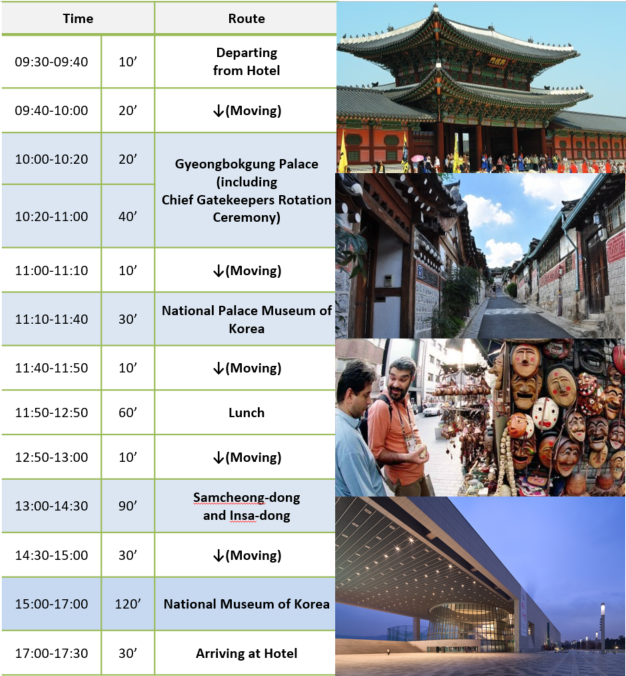 Also, foreign language assistance by professional consultants is available in English, Chinese and Japanese so as to provide information regarding Seoul to the foreigners.

Gwangjang Market
Gwangjang Market is one of Korea’s largest traditional markets and is renowned for its quality silk goods, linen bedding and hand-made goods.

These days, the vintage clothing arcade in the market has become a very popular attraction among young people and wholesalers searching for unique vintage fashion.